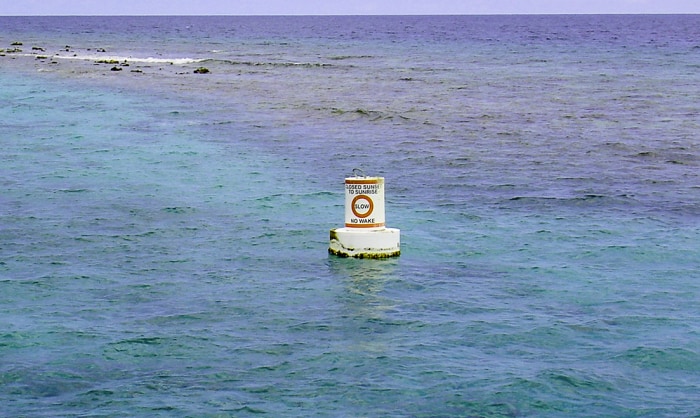 Buoys and markers are on-the-water versions of road signs. They indicate speed limits, regulations, detours, and warnings for road users, or in this case, boaters.

But what exactly does a non-lateral marker indicate? It provides crucial information, signifies regulations, and warns about hazardous areas. There are eight different types of non-lateral buoys. Keep reading for the meaning of each one.

What Does a Non-lateral Marker Indicate?

Unlike lateral markers, non-lateral ones are not fixed on the edges of channels. They show up in various positions and are mainly for:

According to the U.S. Aids to Navigation system booklet published by the U.S. Coast Guard, there are eight types of non-lateral buoys. Let’s take a closer look! 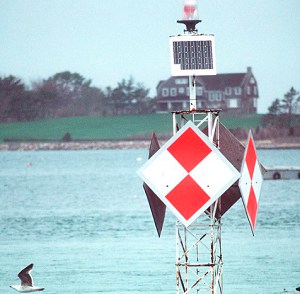 A diamond-shaped Dayboard tells the location of a boat on the nautical map. When you see one, find the corresponding mark on the chart to know your exact position.

To identify a position Dayboard, look for these characteristics besides its standout shape:

Caution: Even though the U.S. Coast Guard works constantly to maintain Navigation Aids, they might shift their positions due to unexpected causes (e.g., environmental conditions, seabed slope, or a boat’s collision). Thus, aids cannot provide complete reliability. You should look out for nearby landmarks, trees, or constructions to confirm your boat’s location. 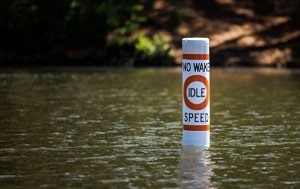 These are the most common types of non-lateral markers, standing out with the “can” shape. They are white buoys with orange markings and black lettering. The orange markings can be diamonds, circles, or squares.

Information and regulatory markers inform boaters of dangers, situations, or directions. The orange shape of the buoy decides its function:

For example, you might see a white “can” buoy that has an orange square, a left-pointing arrow, and the text Fuel. This marker indicates the directions to the nearest fuel station.

Besides the unique shapes and colors, information and regulatory markers have two orange horizontal bands at the top and bottom. They might also be lighted or unlighted. If lit, they display a white light. 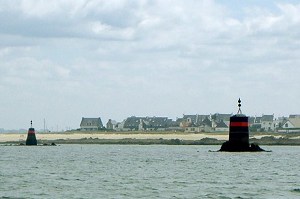 An isolated danger marker indicates that a threat lies ahead. However, the threat is small and isolated with navigable water around it. You can pass it on all sides, but remember to use caution when approaching.

These buoys are black with red horizontal stripes. They might bear two sphere topmarks. If lit, they display two short flashes every five seconds.

These marks are under the possession of the state, not the Coast Guard. They indicate that hazards extend from the mark to the shore. Do not navigate your boat to this area.

The marks have black and white vertical stripes. They might have a white reflector or flash quick intervals of white light. 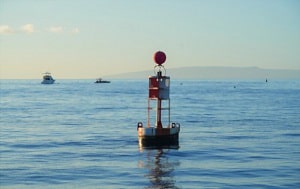 These aids mark fairways, mid-channels, and other offshore approach points. They signify that you are approaching safe water. You can pass them on all sides.

A safe water non-lateral marker has red and white vertical stripes with a sphere on top. If lit, it displays Morse Code A, which is a long flash followed by a short flash every five seconds. 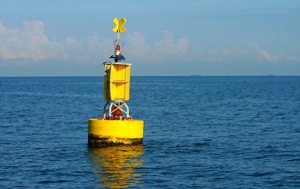 Special aids indicate the features of an area, such as area limits for anchorage, cables or pipelines, and military zones.

A special aid is all-yellow. Its shape varies but usually follows the shape of nearby buoys. If it is lighted, it displays a fixed yellow light or rapid flashes. 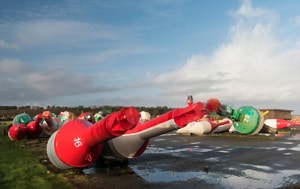 Dayboard Ranges are pairs of unlighted or lighted fixed aids. When the vessel operator observes a pair in line, he/she can tell whether the boat is on the centerline of a channel.

They appear in multiple colors, which don’t affect their meanings. Some colors of Dayboard Ranges are green, red, white, and black. 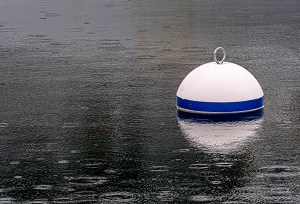 Mooring buoys might have cylinder or sphere shapes. Their colors are white with blue horizontal stripes. Most mooring buoys are privately owned, and you might need permission to use one.

The U.S. Aids to Navigation system follows a set of colors, shapes, numbers, and lights. It won’t take you long to learn this logical and straightforward system.

To sum up, the answer to “What does a non-lateral marker indicate?” depends on the type of marker you see. It might provide important information, warn about hazards, mark an isolated danger, or allow you to moor your boat to it.

What non-lateral markers do you encounter most often? Is there a warning you want to leave for new boaters? Join the discussion in the comment section.